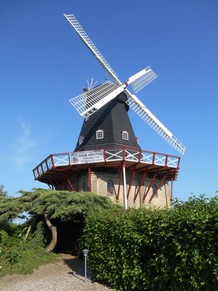 Oh, beautiful old mill,
of boards, spikes and planks
sitting here as a dear landmark
you are in our thoughts.
You remind us of time and signs,
You stand there in draught and rain
A sign from the time gone by.
Svend Laursen.

This is how the first foreman of the millers’ guild, Svend Laursen described “The Landmark of Løve Township”.

A new era for the mill – it becomes a national treasure :
As the miller grew older, and the new times rendered the mill superfluous, he wished to protect the mill. Negotiations were made with the parish council regarding a takeover amount of 10 000 DKK. The parish was to be asked, to see if people were agreeable to a preservation of the mill.

It was suggested that Ole Pedersen should sell the house and donate the mill to anyone who might be interested in taking over, but he didn’t much care for that idea at first. Eventually, he ended up donating the mill to the people in the parish, represented by the new millers’ guild whose task it was to see to the protection and preserve the mill.

The formal transfer took place in 1961.

According to a document dated 23/02, the mill was officially protected.

Løve Mølle from 1961 :
It was not also easy for the miller’s guild to live up to the task of maintaining the mill, but the different Boards have always managed to continue the work done by their predecessors.

Such wings are expensive and they are huge : 21,67 m long, weight : 1 ½ tons. It takes two larch trunks to make one wing. It has to be larch, because of its high content of resin.

The tree has to dry and stock before it can be used. This was done at mill builder Jørn Nilsson’s place in Løve, who was also a member of the milers’ guild. He learned mill building from  Falck Christensen, who was a 3rd generation mill builder. The placement of the wing in 1988 was the first one done by Jørn Nilsson himself, after having finished his training.

Slowly but surely the raw trunks were transformed into a perfectly made mill’s wing, who was mounted completely according to plans on a beautiful September day in 1988. The whole town celebrated the event, and many people volunteered at the towing rope which should take the wing from the ground to its place on the mill’s shaft. – It had to be done by hand, just like in the old days!